The Management of the University of Education, Winneba (UEW) on Tuesday, 31st July, 2018 received ten awardees of the Association of Registrars of Nigerian Universities (ARNU) at its (UEW) Main Campus in Winneba.

The visit which was initiated by the Ghana Institute of Management and Public Administration (GIMPA), intended to host the awardees on a Study Tour to Ghana, visit other Ghanaian Universities, learn from them and tour their campuses as well.

However, with no agitation that UEW is among the leading Universities in Ghana, it was chosen as one of the Universities for the awardees to tour.

On the arrival of the awardees, the Registrar, Surv. Paul Osei-Barima Esq together with Deputy Registrars of UEW and the guests paid a courtesy visit to the Ag. Vice-Chancellor, Rev. Fr. Prof. Anthony Afful-Broni at the Council Chamber, North Campus, Winneba where he expressed his heartfelt pleasure on the recognition given to the University.

The Ag. Vice-Chancellor said Ghana and Nigeria have been good companions in a lot of ways especially in football as well as in many other things such as independence, migration (immigration and emigration), oil production and showbiz. 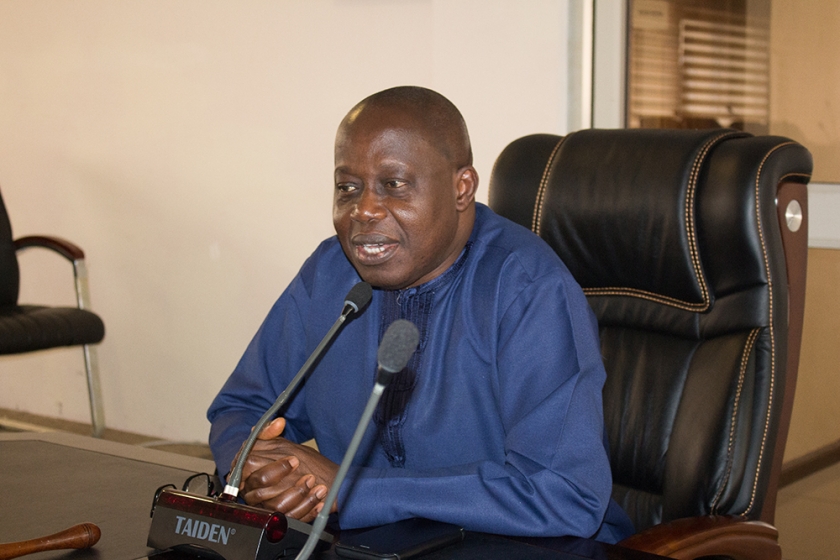 “We are very proud to say that we are the leading Teacher Education University in Ghana because out of every 100 students that we admit, we train not less than 80 of them to become teachers. In this University, if you are employed even as an astrophysicist or a professor from anywhere, you would have to go through some orientation or training to become a professional educator.

“So, we have the Post-Graduate Teaching in Higher Learning for everybody who comes here who is not a professional teacher. This is one thing that makes UEW so unique. Again, we are also spread throughout the whole country. Every political or geographical region of Ghana has a presence of our University because we have 38 Distance Education Centres; we are the pioneers of Distance Education in Ghana.” Rev. Fr. Prof. Afful-Broni informed the guests. 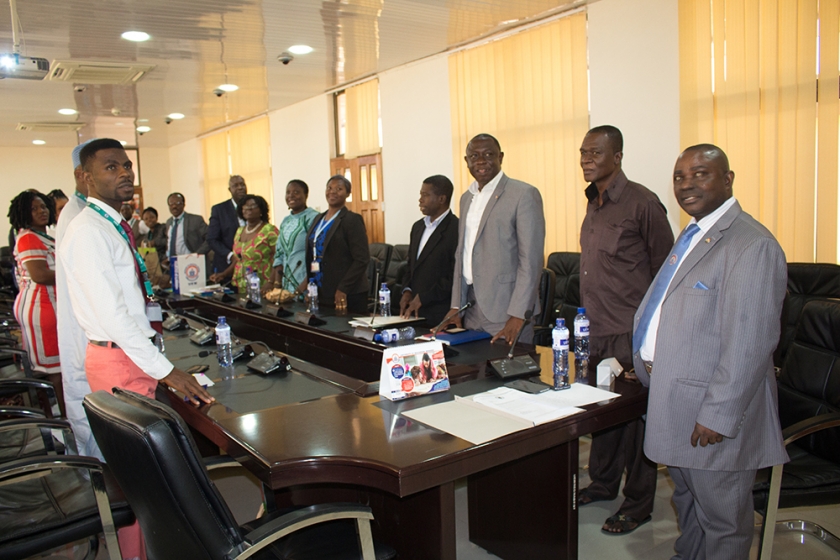 After meeting the Ag. Vice-Chancellor, the team proceeded to the Registrar’s Conference Room where the Registrar, narrated the history of UEW to the guests. However, Deputy Registrars present also gave an account of what transpires in their Divisions. 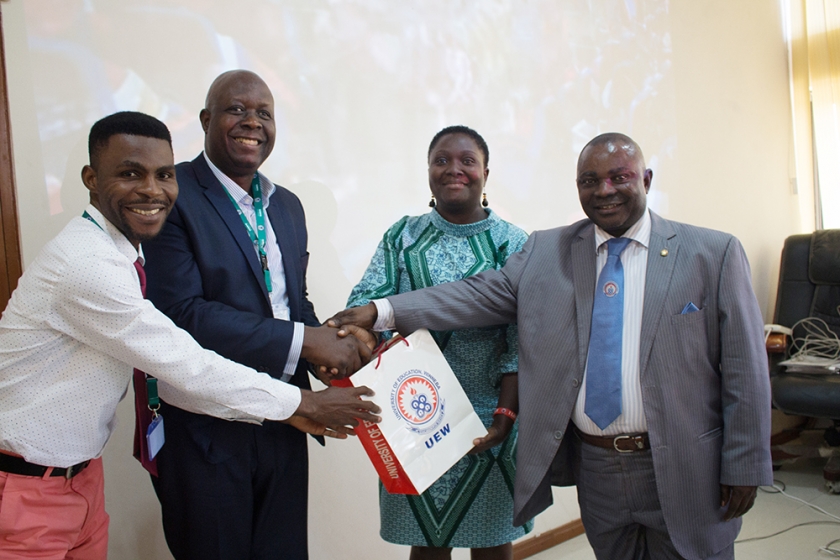 A member of the awardees thanked Management of UEW for the kind gesture and explained that ARNU always give awards to young Registrars to travel to other Universities across the world to understudy them as Administrators. He added that “so we go back to our Universities and inculcate them into the Nigerian University system”.

The awardees were then conducted round UEW. The tour started from the North Campus where they visited places such as the Jophus Anamuah-Mensah Conference Centre, Faculty Block, SSNIT and the Administration Block. They continued to the South Campus and ended their tour at the Central Campus. 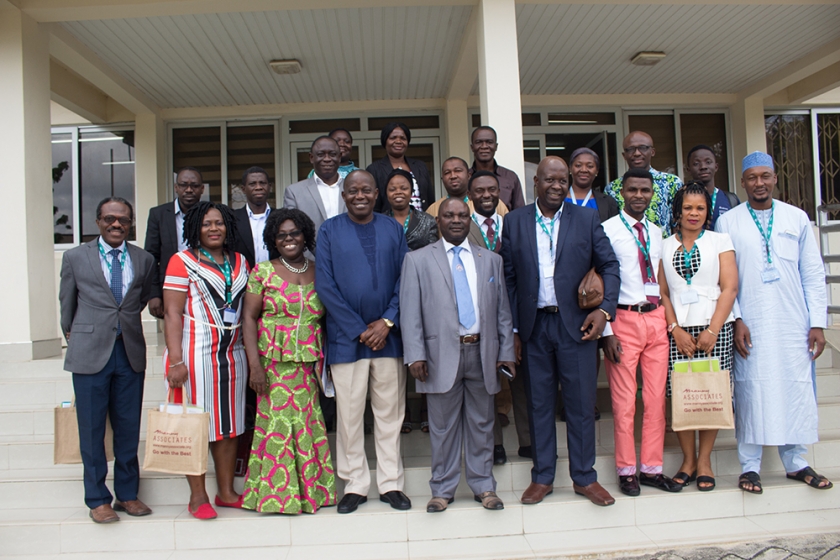 University Officials in a group photograph with the awardees of ARNU 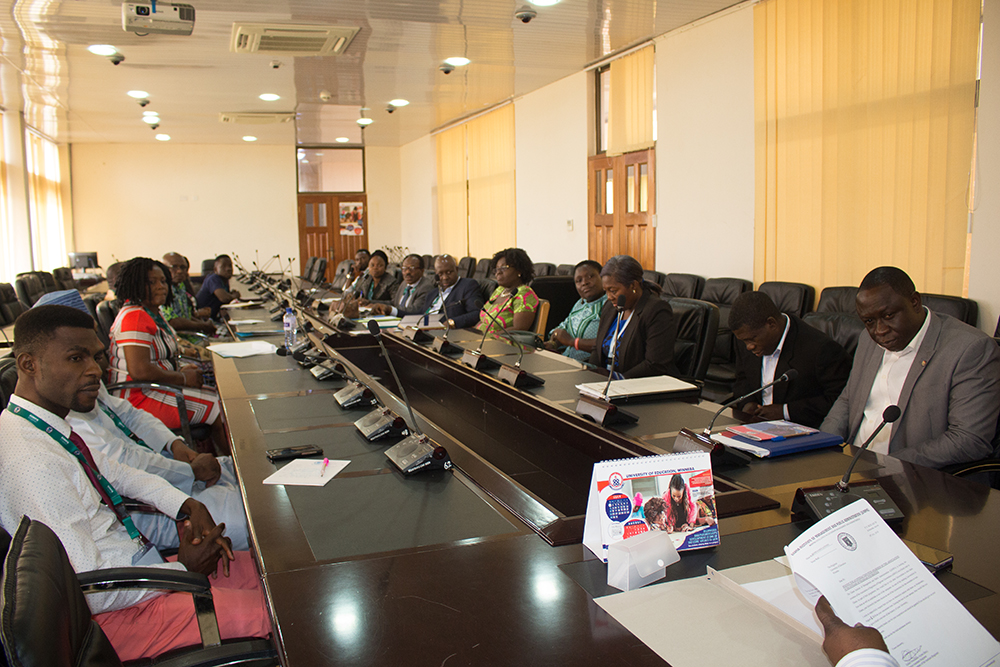