UEW Graduate Heeds to the call to Create own Business

Graduates of the University of Education, Winneba (UEW) are giving expression to the call by Management of the University in recent times to dare to create and build their own business, even if in small and humble ways.

One such is Mr. Nicholas Cudjoe. Mr. Nicholas Cudjoe pursued a degree programme in Graphic Design and graduated in 2018 with Second-Class Upper Division honours.  He is currently the Chief Executive Officer (CEO) of Nikhana Media.

He registered his company in September, 2018 while on his national service and moved into full gear operations right after the service. Nikhana Media is a multimedia firm that provides quality services in website design and hosting, branding, graphic design, book publishing, video production, photography, printing, and embroidery. The business is located at Kakumdo, Cape Coast in the Central Region of Ghana. 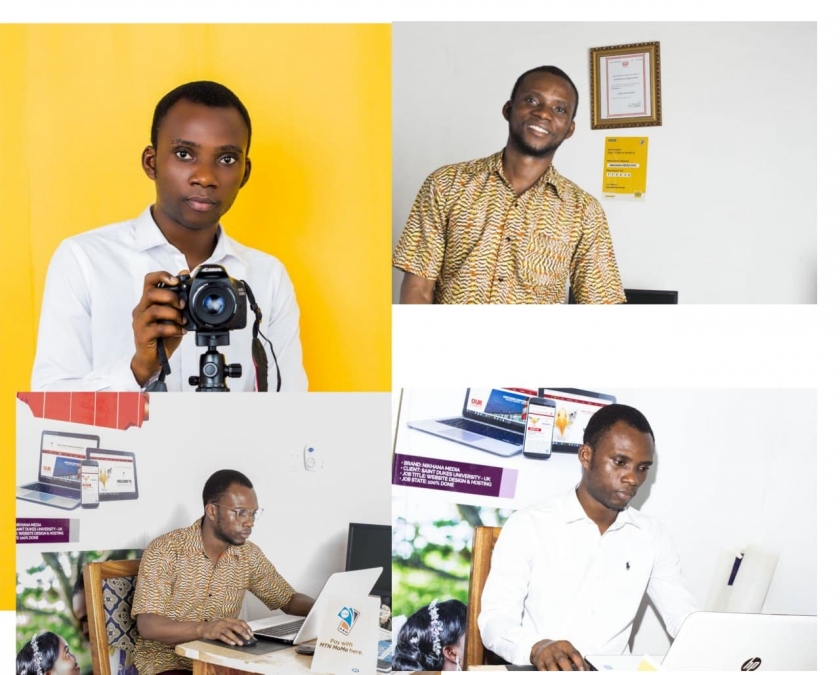 Speaking in an interview with the UEW Media Relations outfit, he proudly disclosed that the knowledge he acquired at UEW had truly honed his talent and skills. He commended all his Graphic Design lecturers for giving him the needed inspiration that ignited his start-up business.

“We were trained to be confident and were fully equipped for the industry and this was my greatest inspiration. Most times, our lecturers will instill in us the passion to play major roles in the industry after school and to make sure we come out of school without being a burden to society and the nation at large. Learning from this, I made it my greatest ambition to create a start-up right after School.

“I was also inspired to setup Nikhana Media to help deliver to my target group, products with a professional touch. Another inspiration was to contribute my quota to the development of my motherland by helping employ myself and others to lessen the burden of unemployment in the country,” he recounted.

Mr. Cudjoe revealed that he was looking forward to partnering with his former Department to pave the way for many students from the Department to benefit from his company and experience, by undertaking their industrial attachment there soon. He indicated that he wants his company to have a nationwide presence offering the best in the Print, Film, and Digital media services in the next five years. 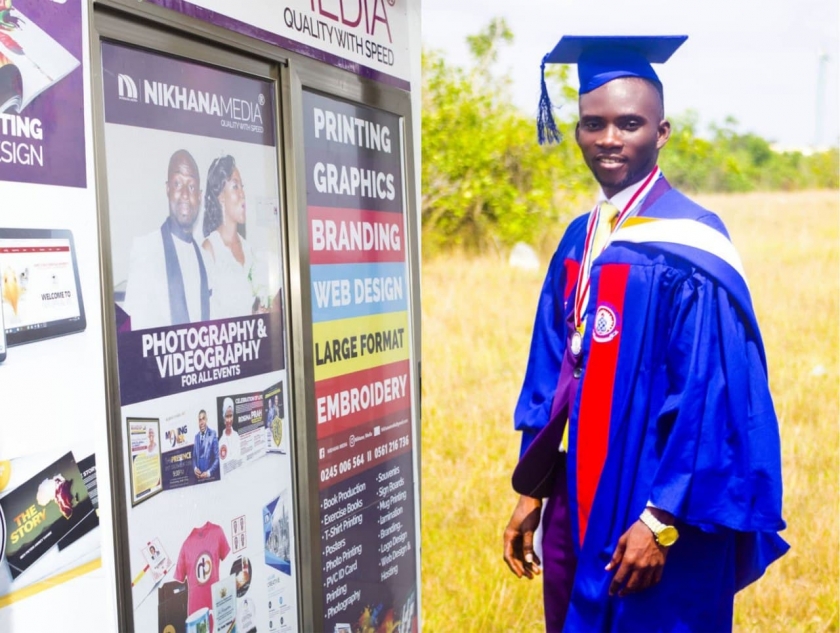 He encouraged the UEW Management to keep up the good work and to continue to invest in the Department of Graphic Design in providing the needed facilities and equipment to help in tutoring and practical work of students.

The CEO of Nikhana Media urged his colleague graduates who are still unemployed to be focused and get something doing.

“It may seem difficult and impossible until they give themselves a chance by trying. So, they must be determined to get something started. All they need to do is to put into practice the knowledge and skills they acquired in school. Do something small today and like a seed planted in the soil, it will germinate, grow, and become a great tree tomorrow.”

Mr. Nicholas Cudjoe was born at Abrem Birase in the Komenda Edina Eguafo Abrem (KEEA) District in the Central Region of Ghana and is the eldest of three children. He schooled in Cape Coast, having received his basic and secondary school education at Tuwohofo Holly International School and University Practice Senior High School respectively.

Currently, he holds a Bachelor of Arts degree in Graphic Design from UEW. He is an author of two books titled, “The Wholesomeness of God (God is not limited) and Forgiveness Heals”. He is also a songwriter, singer, entrepreneur, preacher, inspirational speaker, and graphic designer.