The UEW-Air Force Cadet Corp (AFCC) whose core objectives are to instill discipline into members as well as the general student body; mount guard of honour parades during important UEW occasions—Congregation, Matriculation, Special Visits of Statesmen such as the President’s visits, etc.; assisting with School Security during official UEW occasions as well as student activities such as processions, durbars, beauty pageants, games, entertainment shows, elections, etc., has also gone a step ahead of the above core objectives, to organize a clean-up exercises to beautify the frontage of the main entrance to the University. This clean-up exercise was done from 6:30a.m. to 8:30a.m. on Saturday 15th October, 2016 with a contingent of 30 men including the officers. The UEW-AFCC pledges to undertake clean-up activities at different locations on the Winneba campus in the 2016-2017 academic year.

We, however, wish to take this opportunity to plead with the SRC and the University Management to come to our aid and provide us with logistics (especially uniforms) as this will go a long way to motivate the members to continuously engage in such exercises. The last time we had new uniforms was 2008, during Pearl-Akua Agyeman’s SRC Administration, where the AFCC had forty-five (45) Olive Green (OG) set—including boots, berets and belts. All the remaining uniform (10 in all) is nothing to write home about.

We hope that this gesture of cleaning-up of our streets will not only become part of the Cadet’s core values but also contribute our quota in sustaining the beautification efforts of the University’s Management. 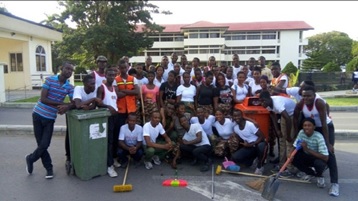 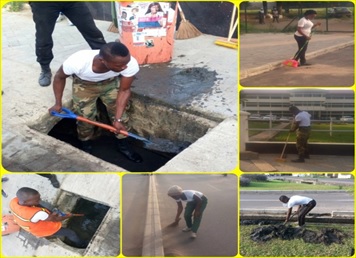