The University of Education, Winneba Chapter of Graduate Students’ Association of Ghana (GRASAG-UEW) on Friday, 31st August, 2018 swore in its elected executives for the 2018/2019 academic year at the Registrar’s Conference Room, North Campus, Winneba. Chairman for the occasion, Surv. Paul Osei-Barimah Esq in an address

In his Opening Remarks, the Registrar expressed gladness explaining that it was a period for learning, a period to serve and a period to be mature in mind.

“As leaders of graduate students, this is the time to behave as a matured person ready to take position and accept divergent views however, unpalatable they may be. You should learn to be very selfless, show no personal interest but seek for the general welfare of your people.

“There is no need to take an entrenched position because if you do that, sooner or later you would regret especially when your term of office expires. If you become more personal and you are so much glued to your personal interest, you will be exposed after you have exited.” The Registrar advised the elected executives.

In his Farewell Message, the outgone GRASAG-UEW President, Mr. Emmanuel Owusu expressed sincere gratitude to Management of UEW particularly the Vice-Chancellor, Very Rev. Fr. Prof. Anthony Afful-Broni for the countless support accorded him and his cohorts during their period of service. “Mr. Chairman, we say with pride and great joy in our hearts that, we hand over power today feeling fulfilled not because there were no challenges in our way towards the achievement of our pledges, but because we saw opportunities in every challenge we were confronted with, and together, we were resolute to surmount all the challenges and get our campaign promises fulfilled.

“With the support of the Vice-Chancellor, the University Management, Prof. George Kankam and Prof. Kolawole Raheem, and the staff at Institute for Educational Research and Innovation Studies (IERIS), we were able to organise two successful seminars on thesis and proposal writing for graduate students.” The immediate past GRASAG-UEW President indicated.

In his Acceptance Speech, the GRASAG-UEW President-elect, Mr. Godwin Kusi Danquah applauded the immediate past executives for a task well executed. “They have tremendous and remarkable achievements to their credit. Congratulations to you all for your devotion to the course of the people who voted for you. Through your handwork GRASAG-UEW was adjudged the overall best GRASAG-Local Association of the year at the awards night during the just ended GRASAG National Congress held in University of Cape Coast.” Mr. Danquah said.

He stressed that “I know your performance has set a base for us and with determination, we hope to reach there and possibly go beyond”. 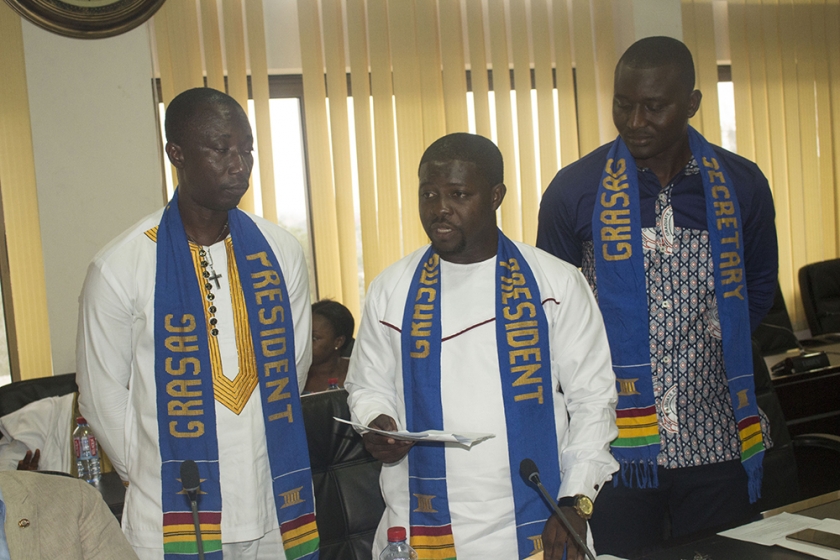 The swearing in was presided over by the Chief Justice (UEW), His Lordship Foster Tawiah. Attendees in a group photograph after the swearing in ceremony