Affianaman Honours the Vice-Chancellor of UEW

A Special Durbar has been held at Assin Asempanaye Catholic Church in honour of an industrious son of Affianaman, Rev. Fr. Prof. Anthony Afful-Broni, the Vice-Chancellor of the University of Education, Winneba (UEW).

Rev. Fr. Prof. Afful-Broni had recently been appointed the fourth Vice-Chancellor of UEW whose investiture was attended by the President of the Republic of Ghana, His Excellency Nana Addo Danquah Akufo-Addo and his entourage of government officials as well as members of the diplomatic corps, representatives of Sister universities across the country, many traditional rulers as well as religious leaders. There were six Catholic Bishops including the Most Rev. Charles Gabriel Palmer-Buckle who conducted the Induction Service.

The beautifully organised and well attended event brought together many dignitaries including Municipal and District Chief Executives in the area as well as some traditional rulers from the Paramountcies of Assin Atandansu and Assin Apimanim, Adansi Ayaase and a high profile delegation from UEW including the Registrar, Surv. Paul Osei-Barima Esq.; the Ag. Principal, College of Technology Education, Kumasi, Prof Frederick K. Sarfo; the Director, Institute for Distance and e-Learning (IDeL), Prof. Francis Owusu-Mensah; the Director, Institute for Teacher Education and Continuing Professional Development (ITECPD), Prof. Dominic Mensah; and several other Deans and Heads of Department of UEW.

The Vice-Chancellor was given an elaborately designed large traditional chair and foot rest. He was decorated with a beautiful Kente cloth and a pair of native sandals accompanied by three citations; one from Afianaman, another from Asempanaye and a third from the Peace Fan Club. 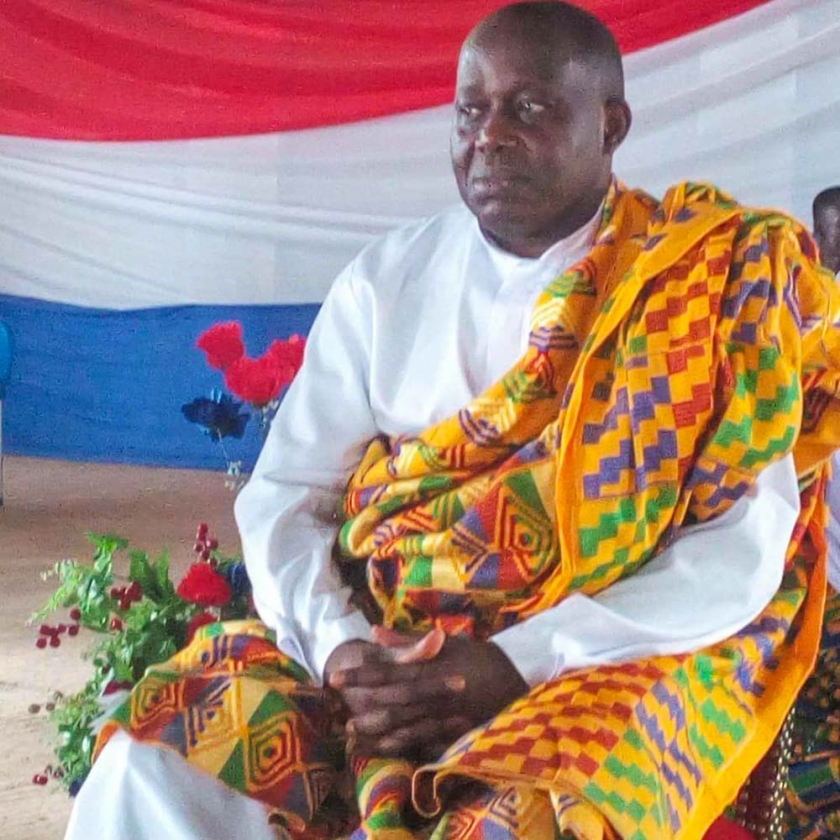 The ceremony which was chaired by Professor Dominic Fobi, Board Chairman of GETFund, saw the former member of Council of State, Hon. Prof. Ato Essuman, former diplomats, well-wishers and other dignitaries attending.

In a speech, Rev. Fr. Prof. Afful-Broni thanked the people profusely for the honour done him and pledged his continued support and commitment towards education and community development in the area and throughout Ghana.

He expressed his gratitude for the title conferred on him and was particularly delighted that it does not make him the last to receive such recognition. He made reference to other native professionals such as medical officers, architects, police officers, teachers, musicians, politicians, businessmen and others who have been supportive of the progress of the communities.

He pledged to support efforts to improve the sanitation situation in the area and has since provided, ten large dustbins for the community. He promised to continue maintaining the community library and the two classrooms for kindergarten which he constructed for the community some 20 years ago as well as a three-classroom block with an office which he had donated on his 25th anniversary of priestly ordination.

He further promised to support the improvement of security in the area by liaising with the regional police command.

He noted with joy that almost every household in Asempanaye could now boast of a University graduate and that many more of the youth have also enrolled in nursing training schools.

Rev. Fr. Prof. Afful-Broni thanked Prof. Dominic Fobi for his support and inspiration. He paid glowing tribute to those who had contributed to education in the area.

The Chairman for the occasion Prof. Dominic Fobi urged Rev. Fr. Prof. Afful-Broni to continue with his good works to the people of the area and consider everyone as his child, helping more people to keep educating and preparing themselves to become as highly placed as possible. He added that the communities would always support and pray for him.

As part of activities lined up for the ceremony, a football match and a free medical screening service was organised with sponsorship by Rev. Fr. Prof. Afful-Broni for the Asempanaye community.

A big family party hosting over 500 people was held by  Prof. Afful-Broni to crown activities for the day as well as thank God for enabling them witness the last Sunday of 2018.